The modern settlement of Clay County began in 1859 when the land was opened for legal occupation. In 1862 the county organization was effected and commissioners and officers were named. The city of Vermillion was founded in 1859 and incorporated in 1873. It was named for either the old Fort Vermillion or for the nearby Vermillion River. In 1862 the territorial legislature located the State University in Vermillion, but nothing was done until 1882 when Clay County voted $10,000 in bonds to construct a building on the campus.  The current Clay County Courthouse was built in 1912 and houses some of the following offices at 211 West Main Street. 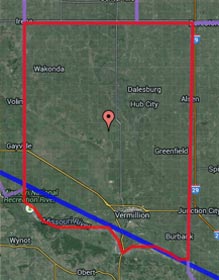